They blinded me with Science! 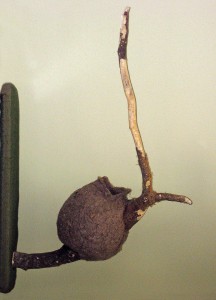 As I’ve mentioned in previous posts, my undergrad degree is in biology, and I grew up in a very scientific household. My mom has degrees in science education and scientific and technical communication and my dad is a fish biologist. Plus they’re nature nerds. Family vacations usually involved backpacking. According to my mom, one of my first words was “sand verbena.” I grew up dissecting fish (martyrs to the cause of helping salmon survive the Columbia river dams), catching snakes and newts (not for dissection) and building robot-sculptures out of old coffee cans, broken machines and spare parts. Now I work in high-tech, and spend my work-days researching emerging technologies.

I’m pretty sure my science-nerdiness influences my artwork, though I wouldn’t say there is always an obvious connection, beyond of course the name Volvox. But I’m really drawn to artists who are influenced by science and nature. So, after a long self-centered introduction, I’d like to share with you some artists whose work is highly influenced by science and nature, and whose work is really lovely.

Frank Boyden is a local (Oregon coast) artist whose work is very obviously influenced by the local environment. I love how fascinated he is with things like old gnarled trees and half-decomposed bird skeletons. In this OPB segment he talks about where he gets his inspiration (thanks to my mom for sending it to me). He and Tom Coleman built an anagama near Willamina, Oregon in the 1980s, and have done some really amazing collaborative pieces. Check out this article in Ceramics Monthly about their partnership, which has produced spectacularly beautiful work.

This next artist was brought to my attention by my dad. Luke Jerram creates a lot of science-inspired artwork. His microbiology-inspired glass pieces are pretty darn cool. I really like the comment that “These transparent glass sculptures were created to contemplate the global impact of each disease and to consider how the artificial colouring of scientific imagery affects our understanding of phenomena.” He explains that scientific illustrators use color in their illustrations of viruses and bacteria, to explain different concepts or simply for aesthetics. The use of color might change the way the non-scientific public understands the diseases.I find his rational interesting, because while he has, in his clear glass sculptures, stripped the diseases of their color, he has created an entirely new avenue for misunderstandings. His virus sculptures are based on the same partial-visualizations as the illustrations (microscopy simply is not yet good enough to give us a perfect understanding of the details of virus structures). They are stripped of artificial coloring, and are three-dimensional, but the beauty of the sculptures, the fluidity and delicacy of the glass, and the million-fold increase in scale all maintain the distance between the visualization and reality. But I like that about it. Because no matter how hard we try, I don’t know if most humans have the capacity to fully grasp things on that scale–the smallness of the diseases or the largeness of the impacts they can make on our lives.

Jerram’s Aeolus Acoustic Wind Pavilion is awesome–I’d really like to see it in person someday. It is inspired by wind and light, architecture and acoustics. (Side note: Jerram designs his pieces, but most of them are actually constructed by other people–skilled craftsmen in whatever medium he is using. I have some feelings about this that I’ll address in a future post.)

Jerram’s light-related work reminds me of another artist, James Turrell. Turrell plays with light, and the way our eyes and brains process light. Turrell’s pieces are really interesting. At first they appear boring–a square of light on a wall. But on closer inspection, you realize that the square of light is actually an opening into a room that is lit in such a way as to fool your eye into seeing a flat square of light. A box hanging in the corner turns out to be light projected from a lamp on the opposite side of the room.I saw a show of his work in Seattle at UW’s Henry Art Gallery. They have one of his skyspace pieces as a permanent installation. There is another one in San Francisco at the de Young. Turrell has been working on creating an enormous skyspace in the Roden Crater (outside of Flagstaff, AZ) since the late 1970s. It’s supposed to be finished and open to the public in 2011, but many doubt whether it will ever be open.

Turrell’s skyspaces are pretty amazing. They are rooms that you walk into, with openings in the ceiling. If you sit just so, and look up at just the right angle, the sky drops down onto the top of the hole, giving the impression that the sky is actually a flat surface just above your head. The nature of the illusion varies with the weather and time of day. When (if) the crater ever opens to the public, you can bet I’ll be making the trip.

Of course you all know Andy Goldsworthy. More nature-inspired than hard-core science, but pretty darn cool either way. I really like the temporal nature of much of his work. Of course I’ve only seen his works in stone (Storm King wall is neat, but Drawn Stone at the de Young is more subtle), but I’m really more fascinated with his pieces made of leaves and twigs. Like this, or this, or this. I love the fact that he sets out with no tools and uses only the materials he finds to create the sculptures. Many of them are deliberately short-lived: ice sculptures made at dawn that melt with the rising sun, or driftwood cairns that float away with the tide (sorry, the video is gone). If you haven’t seen Rivers and Tides, I highly recommend it.

You also may know my friend Carol Opie. She is a zoologist and a potter, and makes really awesome ceramic pieces with beetles and skeletons carved in them–but more than just carved. She carves the outline and stretches the clay to create a very three dimensional relief, using clay’s natural tendency towards surface cracks when it’s a little too dry, to produce wonderful texture. We’ve been woodfiring together lately, and I’m so glad–her work is perfect for the anagama.

Please, if you are a fan of any science-minded artists, tell me about them!

Comments Off on They blinded me with Science!